Commander Sinclair ✭✭✭✭✭
July 2018 in Strange New Worlds
Preccursor, I am a life long Star Trek fan. I have been to conventions since the early 80's, back when it was "uncool". Cosplay didn't exist yet, but that didn't stop us from dressing up in uniform and/or makeup. So when it comes to seeing people making fan films of Notable Quality, I get excited!

So I finally watched the latest iteration of Renegades: Requiem, Part I, because I loved the first one, and I expected great things from them. I am not going give you spoiler alerts, there may or may not be any, or it just may not matter any more...

The fact that Renegades is made of SO MANY Actual Star Trek Cast members is just a testament to the love for the shows!
In the First Renegades movie (Then called "Star Trek: Renegades" – prior to Discovery being even on the drawing board), the cast lineup is like this:
Walter Koenig(Chekov): as Admiral Chekov
Tim Russ (Tuvok): Tuvok
Manu Intiraymi (Icheb): as Icheb
Robert Picardo (The Doctor): asLewis Zimmerman
Richard Herd (Admiral Paris): as Admiral Paris
Robert Beltran (Commander Chakotay): as Cordero
Nichelle Nicols (Uhura): as Admiral Jemison

Can you really call this a "fan film" if it involves so many original cast of actual Star Trek Series?

Renegades: Requiem, Part I
First thing, The production of this one was pretty good as the rest, save for the horrible costumes this time. I am unsure about how the "Star Wars" Cantina scene fits into a Star Trek universe, but whatever.

The green screen they use is not very good, or maybe it was the graphics guys... 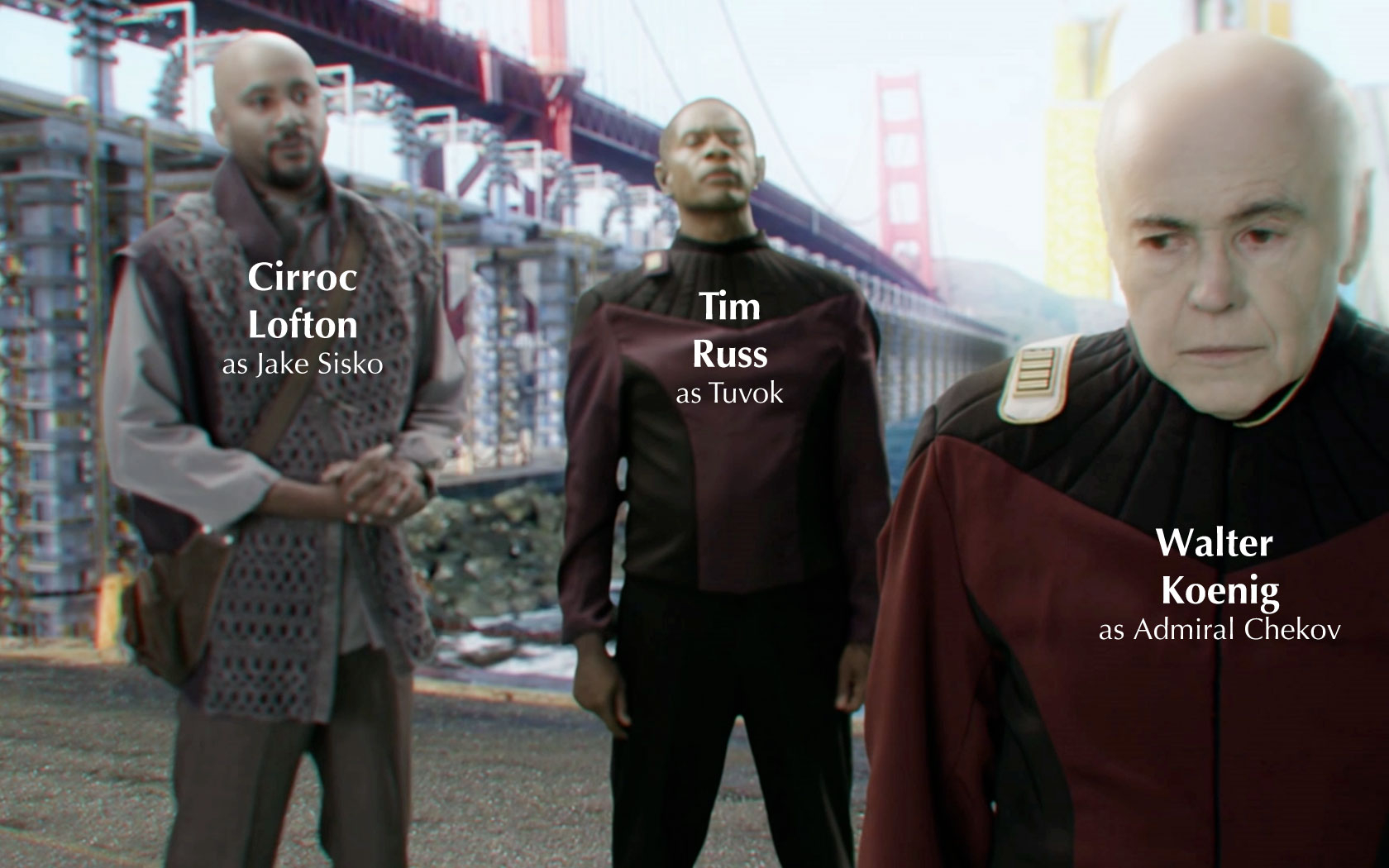 LOVE the fact Terry Farrell joined this one! 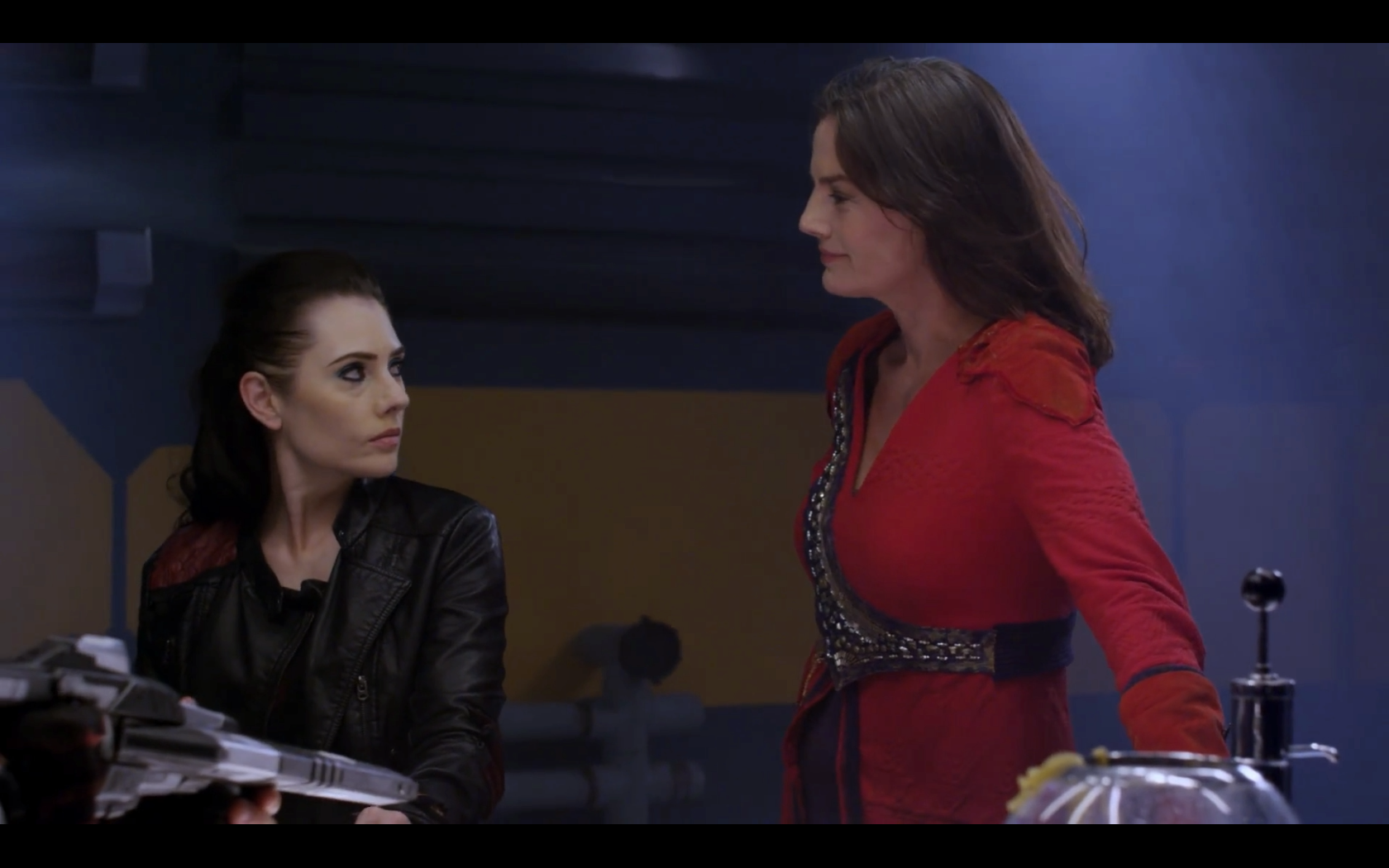 Lexxa Singh on the Left, Jada on the right.

I noticed that they changed a few names and titles, suspiciously departing from the first movie.
The "Federation" is now the "Confederation".
Chekov is now called "The Admiral", Tuvok is now Kovok.
Terry Ferrell's character was written suspiciously to sound like Dax, a "Trill", but now she's an Alterrian clone of a dead "Science Officer". AND her name is "Jada", not Jadzia.
Jake Sisko is still referred to as Jake Sisko, but he is in the beginning of the movie, and the credits list him simply as "Jacob". I'm guessing that scene was filmed prior to the announcement and they didn't have time to reshoot.
Lexxa Singh's character is still her, and still referred to as "genetically engineered", however, I am sure they will never refer to her as an "Augment" again. (Her character is the daughter of Khan Noonian Singh)

They very carefully say "Regellians", and not "Rigellians" (reh, vs. Ry). At first I thought it was the actor mis-pronouncing it, then I realized what they did and it cracked me up!

The production release of Renegades:Requiem is after the
CBS announcement , so this is starting to make sense.

Anyway, just sad to see this will probably never have a "Part II", and that they had to adjust the characters names & values to push the limits of being in the ST universe, without actually still being in it.

This is unfortunately why we will never have cards for the Renegades characters. Admiral Chekov would have been awesome, or what I really wanted was Lexxa Singh, and she would have brought a bunch of story lines, and DB could have done an entire Episode for on her & Renegades.

Alas, it was just not meant to be.

Keep on Trekkin'
I want to become a Dilionaire...
0