Rethinking the problem of bots

ReginoldJudd ✭✭✭
March 2020 in Make It So!
So everyone already knows there are bots in this game, right? That is, especially during skirmish and galaxy events, people have automation set up to grind out top spots so they don't have to do it themselves.

I'd love for DB/TP to rethink their strategy for how to deal with this problem, and I'll do so by telling you a story... (I'll separate it with lines so if you don't want a whole story, you can skip it):

In many cities and towns across America, we've fallen in love with the wide traffic lane. In most places now, lanes are made 12 feet wide - 5 feet wider than the widest vehicles. This probably started thanks to the Interstate Highway System using such lanes, but they're also utilized in arterial streets and even neighborhood streets; and, because in neighborhoods people often park on the street instead of driveways, many neighborhood streets are built with 15-foot-wide lanes.

Fortunately or unfortunately, depending on your perspective, traffic speeds increase as lane widths increase. 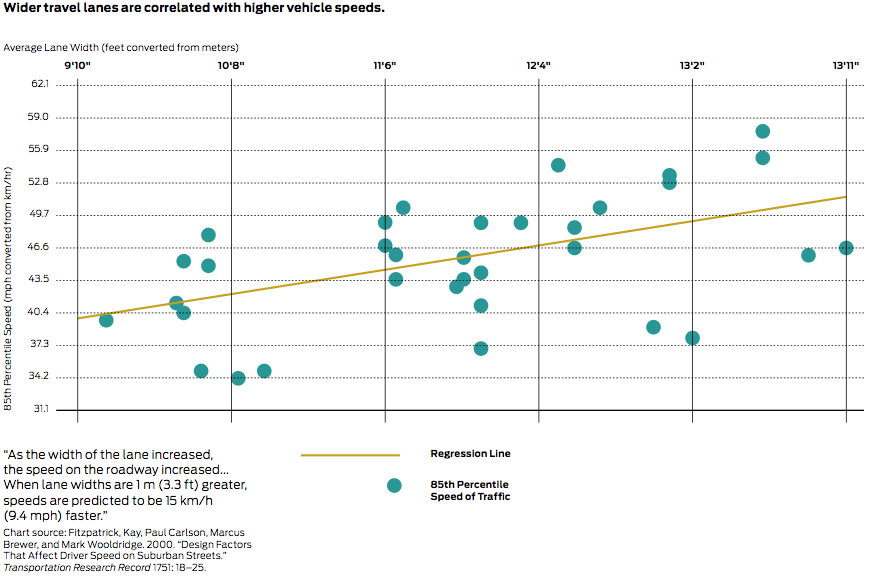 This might seem wonderful if you're in a hurry to get to your destination. Unfortunately, it's literal murder on your ability to use the street for other uses, such as pedestrian and bicycle traffic. When traffic speeds increase, people who aren't surrounded by a ton of steel usually feel less safe about being on the street, and so they are more likely to get where they need to go by car and less likely to use more traditional alternatives.

This isn't just a perception - people really do die more frequently in areas with higher speeds:

And of course, there are more vehicle accidents at higher speeds (although it's fair to point out that the speed itself is not usually the cause of these accidents, but rather it's lane changes, which I'll get to in a moment).

In order to try to keep people safe, cities increased the number of uniformed officers patrolling them, gave the officers radar guns, and told them to ticket speeders, and they installed speed bumps and road humps in neighborhood streets to make high speeds feel harder on the driver.

But the problem that caused all of this originally was the widening of the lanes. When lanes were narrower, people didn't feel as comfortable driving fast. In cities that have realized this fact, they've started testing narrower streets in some places, and found that it really did improve survivability for both vehicle occupants and pedestrians, that it reduced the speed of traffic, and, oddly, didn't affect the average drive time at all!

That's because all those accidents were causing traffic to slow down to a near stand-still.

A similar thing occurs when we increase lanes. The Iowa Department of Transportation recently released a video explaining why 2 lanes with a center turning lane are far safer than 4 lanes, and why traffic times remain the same.

The problem of botting seems similar. The reason people use automation to power their performance in events is because those events take nearly-limitless investment of time from players. Top players in skirmishes routinely play every second of the time from the beginning of the skirmish until the end, including overnight when they should be sleeping. Galaxy events take well in excess of 60000 chron to win, with over 12000 supply missions run during the course of the event.

The traditional way to tackle this problem has been increased bot detection and strategies to try to prevent people from doing it (like the screen that pops up and requires you to choose a character). But the problem with these strategies is that they result in an arms race between developers and players for who can do better - the bot detectors or the bot creators. Spoiler alert: it's always the bot creators. There are a near limitless number of ways bots can be programmed, and doing so is faster than trying to figure out how they're botting in the first place and build tools to stop them.

Plus, from an economic point of view, it's not really in DB/TP's best interest TO stop them - a lot of botters are people who shovel money into the game. (I'm not saying they AREN'T fighting bots because of this; they most certainly are. I'm merely pointing out how doing so could impact them negatively.)

But the initial problem that caused people to bot was the fact that getting first place requires soooo much time investment. Like cities widening lanes and then expecting people to drive slow, you can't require 96 hours of a person's time and then complain when they create a program to do it for them.

That's why we need to fundamentally rethink how events (especially galaxy and skirmish events) are handled.

I suggest that DB/TP should apply the Normal/Elite/Epic hierarchy to these events in terms of cost and reward. For example:

Say you have a Skirmish event. Right now, Normal, Elite, and Epic all cost the same. The vast majority of skirmish runs a player will make are at the upper end of that cost: 1200 intel.


The costs don't change, but the rewards do - that is, someone running Epic receives far greater rewards than someone who runs Normal, despite the same cost of entry.

This is not how it should work; and, in fact, it isn't how this works in the rest of the game. An away team mission or space mission generally has different costs for each tier (normal, elite, and epic). It might cost 4 chron at normal, 12 at elite, and 24 at epic, for instance.

Instead, what if we vastly increased the rewards and the costs?

Galaxy (Provide a new window after selecting faction that lets people choose to run at different tiers):
Normal: As today
Elite: Requires either 4x each material to make an item (requiring little change other than adding the multiplier) or requires uncommon (green) materials to make items. Rewards 5x VP.
Epic: Requires either 16x each material or rare (blue) materials. Rewards 25x VP.
Legendary (if needed): Requires either 64x each material or super rare (purple) materials. Rewards 125x VP.
Note: either new crit items would need to be created or you'd receive 4/16/64x crit items. If using the 4/16/64 version, you'd also want to add new tiers for those turn-ins, so that people could turn in huge numbers of crit items en masse.
0
«12»