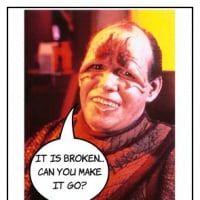 Slick ✭✭✭
October 2021 in Strange New Worlds
What does everyone think of it? I liked it. But i swear if it didn't say "Star Trek" in the beginning or have Janeway in it I would think I was watching a Star Wars animated series. The main antagonist is eerily similar to General Grievous.
Fleet Admiral - Dazed & Confused 🤸🤸‍♀️🙃
Where is our Enterprise B & C?
I also want the Pegasus or Grissom.
We should also have a 1* TNG season 1 LT JG Worf
0